Crafting History is an exhibition of work created in response to the history of Manchester Craft & Design Centre (MCDC).  Within the brief, the participating artists were given the option to use their personal memories of MCDC as a starting point, or to draw inspiration from the recent Collecting History exhibition (which ran from 28 April – 30 June 2012) with an accompanying blog which recorded the project and is described below:-

Manchester Craft & Design Centre used to be the fish and poultry market and the building as it stands today is actually only part of what was the original structure.

Below are a few pictures from the Collecting History blog which illustrate this (more can be viewed here)..

Further images and maps of Smithfield Market can be seen on the Manchester History website here.  There are also some photographs of the time "In-between" here - showing the redevelopment of the building which became Manchester Craft & Design Centre.

The information collected throughout the Collecting History project varied from personal anecdotes recounting various incidents from the past to more recent history, through to archive images and films of Smithfields as a working market.  I focused on the North West film archive footage for inspiration, which can be viewed here.  This clip is a compilation of three films of all the Smithfield markets (fruit, vegetable, poultry and fish) from the early 1900s and the 1970s.  It shows the area as a bustling and vibrant place up until 1973 when the majority of the market buildings were demolished.

Below I have screencapped parts of the film.  At 9:35 the camera pans slowly out showing the ironwork and distinctive frontage which echoes that of Manchester Craft & Design Centre today..

..and what initially looks like glitches in the film at 10:05 are revealed at 10:25 to be falling glass coming from the roof above.  In the image below, a figure wielding a large stick can be seen smashing the glass..

The image above was cropped further and then a drawing made of this - eventually used to form the decorative detail of the brooch back.. 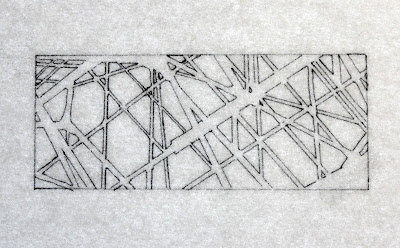 A fractured fishing net design was embedded in the handmade resin stone and cut to scale of the floor plan of Manchester Craft & Design Centre, then squared off..

Clear resin was used to give the stone the quality of glass through which the decorative brooch back can be seen in the finished piece.. 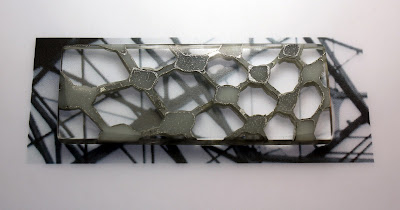 The drawing of the roof was fixed to the back of the silver brooch mount made to fit the resin stone and the negative space pierced out of the metal.. 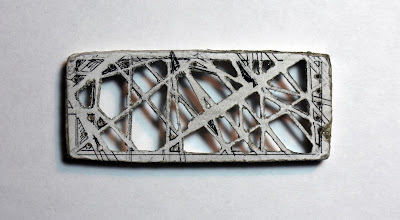 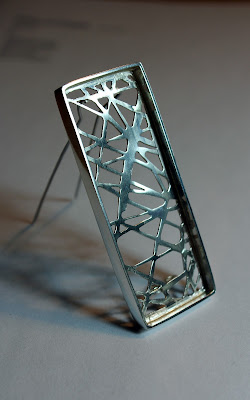 The food wholesalers are gone but the area now known as the Northern Quarter is still occupied by independent business people, just as it was in its former incarnation as Europe's largest market of its kind.

Crafting History runs until 10th November 2012 concluding with an auction at MCDC of all the work made, with proceeds going to charity.

Posted by Jane Dzisiewski at 15:02 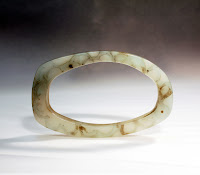